Believe me or not this very question, is the reason which keeps most of the physicists baffled about the strange nature of the particles in the world of quantum mechanics. When I was in school, about an age of 11 or 12, when my elder brother showed me a video of a famous experiment called Double Slit Experiment.

That video ignited a new spark of curiosity within me, seriously just think about this, we have been to moon and back, carried out successful missions to Mars and achieved so much advancements in the field of science and technology yet there are areas like these where we are still struggling to find the absolute answers about the nature of the world we live in.

Alright, I think you must be eager to know about that video now and what it portrays, in short, it’s about an experiment conducted by Thomas Young in 1801 and is known as Young’s Double Slit Experiment. This famous experiment is actually a simplification of a series of experiments on light conducted by Young. In a completely darkened room, Young allowed a thin beam of sunlight to pass through an aperture on his window and onto two narrow, closely spaced openings (the double slit). This sunlight then cast a shadow on the wall behind the apparatus. Young found that the light diffracted as it passed through the slits and then interfered with itself created a series of light and dark spots. Since the sunlight consists of all colours of the rainbow, these colours were also visible in the projected spots. Young concluded that light consists of waves and not particles since only waves were known to diffract and interfere in exactly the manner that light did in his experiment.

Let Dr Quantum himself explain Young’s idea which was implemented in this experiment, watch this amazing video for an explanation with a twist at the end.

Mathematically, we can devise equations for the positions of these interference(s): 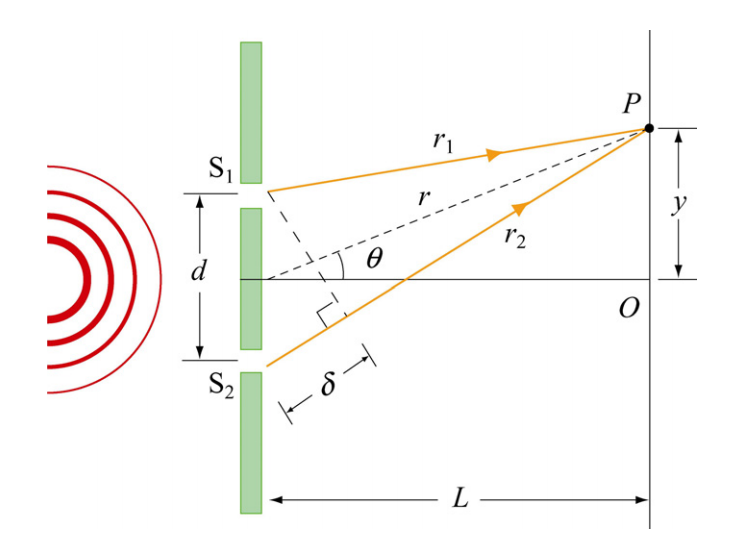 This debate has raged for generations amongst the giants of the physics community regarding the nature of light, namely whether it is a particle or an electromagnetic wave. For centuries, this mysterious and elusive phenomenon left scientists baffled because, with each experiment conducted to define its nature, it seemed to change the way it behaved.

I hope you liked the post and will continue to ponder about the nature of the light around us.